EISRI III presents high-level speakers including former heads of state and key representatives of the European institutions and national governments as well as leaders from leading research institutions, businesses and media. The dedicated workshops are designed to reflect the key issues in this area and to promote “out of the box” thinking and participatory processes.

Speakers include (in alphabetical order):

- Prof. Anne Glover, Chief Scientific Adviser to the President of the European Commission

- Mr. Felipe González, Chairman of the Board of Atomium Culture, Former Prime Minister of Spain

- Prof. Timothy O’Shea, Principal and Vice-Chancellor of the University of Edinburgh 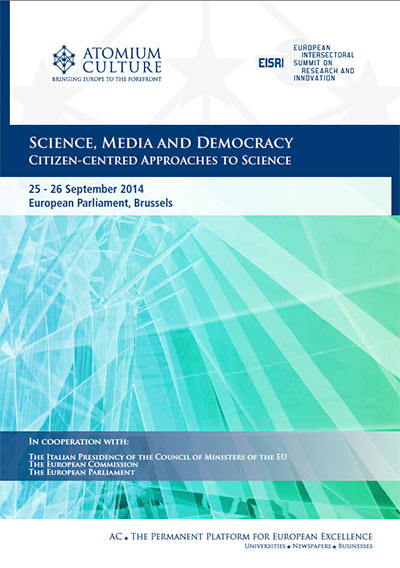 The opening and closing sessions of the Summit are dedicated to the development of the broader issues that need to be tackled and the development of a shared perspective on the direction to be taken in the coming years in order to achieve this (long-term actions).

The parallel and plenary sessions look more in detail at certain key areas that need to be addressed (short-term actions and concrete projects). The parallel working sessions include smaller discussion groups and workshops that are participative and very interactive, giving the possibility to citizens across Europe to testify and learn from the conference.

In order to make the sessions participatory and to engage a larger audience in the debates, new media tools and social media tools were developed and used during the conference for this purpose. Atomium Culture works together with the media engaged in its platform to develop these tools.